From The Document Foundation Wiki
< DE
Jump to: navigation, search
Translate this page

This page is in Work! 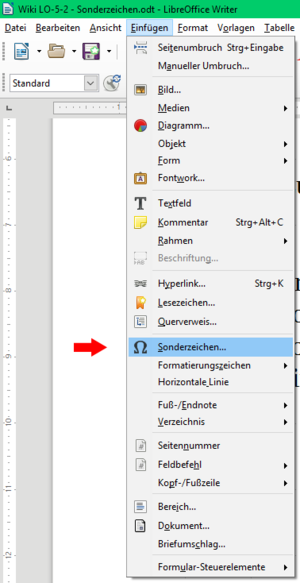 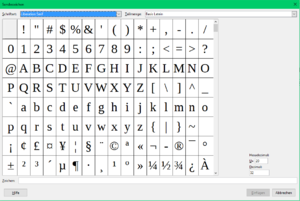 This description refers to the version LibreOffice 5.2.

Link to the Video

Link to the Video (in German [DE]): Schriftarten - Sonderzeichen einfügen in Writer - LibreOffice 5.2

Position the cursor at the point where the special character is to be inserted.

To insert a special character, choose the Menu Insert ▸ Special Character off.

Here the "Font" can be selected with "Subset".

You select a font to display the special characters available for it.

In the lower right corner the character code is displayed in hexadecimal and decimal numbers.

You can click on a character or special characters from the font table.

The corresponding character is entered in the lower line "Characters" and displayed enlarged on the right.

With Insert the character(s) at the cursor position are taken over.

The dialog box can be enlarged.

Position the cursor at the bottom right corner until a diagonal double arrow appears.

Click on the corner of the dialogue box and drag it to the bottom right.

This makes the selection a little easier.

Since the dialogue box "Special Characters" only presents a limited number of characters at the same time, it is often tedious to search for a specific character.

In the Calc table a much larger number of characters is displayed at the same time and it is easier to scroll and change fonts.

Instructions for the "character table.ods"

The table is divided into lines of 100 characters each.

The data area "myZeichen" can be used to mark the inside of the table.

To do this select the menu Data ▸ Select range... and in the dialogue box "Select database range" (the "mySign" range is already marked there) and click OK.

Now open the "Styles" sidebar with F11 or via View ▸ Templates.

You can adjust them here according to your own wishes (e.g. a different font).

Right-click on the cell template "Character Set" and select Change.

In the cell template, the default font is Cambria, Default, 20 pt.

The selected font is immediately displayed in the inner table and with it the characters and special characters contained in it.

Alternatively, you can also derive one or more cell templates from the cell template "Character set", give them a memorable name and enter the desired font there.

The font character set corresponds to all characters and special characters contained in this font.

In the early days of the computer, the so-called ASCII character set was designed.

This was based on a 7-bit representation of characters.

Of these, the first 32 possibilities are occupied by non-printable characters.

So there was just enough space for the small and large alphabet, the numbers 0-9 and some special characters.

The origin and the extent to this was the typewriter.

This allows a wide range of characters and special characters.

Often not all possibilities are used, so that coded places (character places) remain unused.

At this point the Glyph⁠

then only a white area or a square or rectangle.

If a character that represents only a white area is inserted into the text, nothing will be seen there of course.

Font of the special kind

With many fonts, the main purpose is to make the font look special.

But our topic here are the special characters.

Special fonts have even more to offer here, e.g. cutouts:

A character table can also be called up in Windows.

This can be clicked on via Start ▸ All Apps ▸ Windows Accessories ▸ Chart.

A font can also be selected right at the top.

With "Character selection" it is possible to select a character from the table with Select.

With the button Copy, the selected character is copied to the clipboard and can now be pasted at any position.

In the line "Character set" you can choose between "Unicode", "DOS+language" and "Windows+language".

In the Unicode field, the value for a known Unicode can be entered.

The "r" character is then displayed in the table at the top left.

If this character is no longer needed, the table can be reset to its original state by pressing the Reset button.

With "Grouping by:" it is still possible to group the displayed character set.

Simply enter the term and click the Search button.

After selecting a character, the table is reset to its original state with the Reset button.

The coding and a description of the character is displayed at the bottom left.

For questions on this topic go to Ask.LibreOffice