This is the page with our 4.4 release notes. It should be final now that the 4.4 version itself has been released. However, if you spot any missing or incorrect information, then please let us know. Thanks in advance for your help!

Shapes can have a TextBox

Writer shapes can now have a Textbox, meaning that it's possible to have complex Writer content and full drawinglayer geometry for a shape at the same time. tdf#70942 blog entry (Miklós Vajna, Collabora) 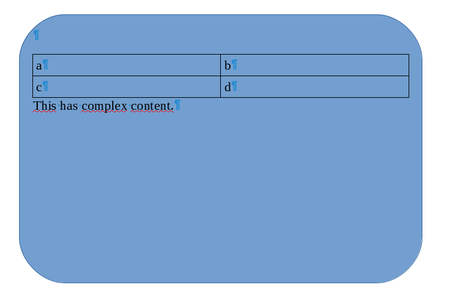 Table in the shape text and shape with rounded corners.

The style dropdown now has a split menu to edit or update the selected style. tdf#62081 (Szymon Kłos and Samuel Mehrbrodt) 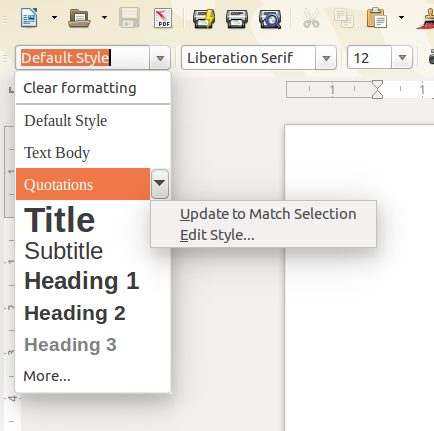 Line numbering easier to apply for headers and footers

Line numbering for Headers and Footers (using the proper Header/Footer paragraph style) can now be enabled in the same location where the line numbering is set in Tools ▸ Line Numbering, in addition to the already existing method in the style dialog. tdf#84504 (Charu Tyagi, Ericsson) 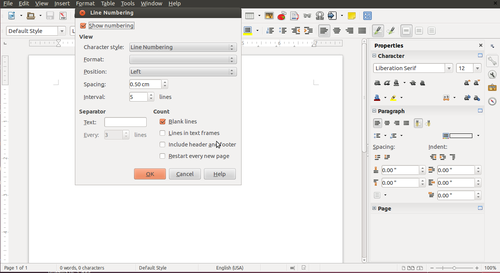 Before (on the left) and after (on the right) side-by-side of how the statusbar page numbers have improved.

The “Standard” and “Formatting” toolbars were reorganized by removing uncommonly used commands and replacing them with frequent features, in order to reduce the need for users to hunt through menus or customize toolbars. Additional buttons have been added to the toolbars, but are hidden by default and can be enabled by using the “Customize” option. tdf#81475 (Yousuf Philips and Samuel Mehrbrodt)

A new feature was added to convert formula cells into static values (via the menu Tools ▸ Cell Contents ▸ Formula to Value). Previously, you would need to cut the cells and paste them back into place to have the same outcome. (Kohei Yoshida, Collabora)

The “Standard” and “Formatting” toolbars were reorganized by removing uncommonly used commands and replacing them with frequent features, in order to reduce the need for users to hunt through menus or customize toolbars. Additional buttons have been added to the toolbars, but are hidden by default and can be enabled by using the toolbar right-click context menu “Customize Toolbar...” option or Tools ▸ Customize.... tdf#85594 (Yousuf Philips) 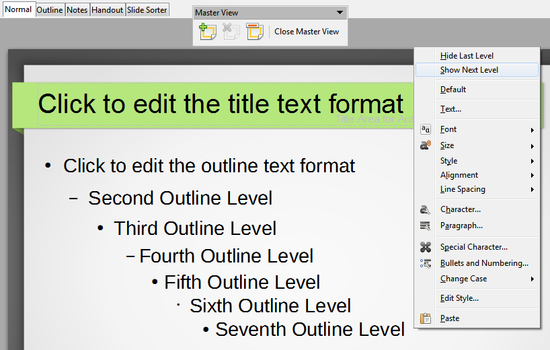 In Slide Master view, master elements which Impress allows the user to remove via View ▸ Master ▸ Master elements can now be removed by direct deletion of the matching placeholder in the Master View preview. In other words, to remove a footer, header, slide number or date/time, select the corresponding box in Master View and press Delete. (Caolán McNamara, Red Hat) 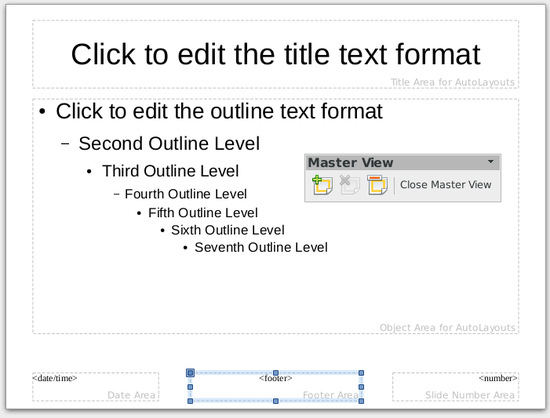 When we have a table in impress, have modified a cell style and then add a new row or column it now inherits the style of the current row/column for the new one instead of using default values. tdf#60712 (Hideki Ikeda)

It is now possible to save an Impress/Draw file read-only and require a password to modify it. tdf#63483 (Katarína Behrens)

Creation of a new zoom mode button that is able to zoom in, zoom out and pan with the use of Ctrl and ⇧ Shift. tdf#55903 tdf#83572 (Maxim Monastirsky and Yousuf Philips)

The default toolbars were reorganized to bring frequent used features to the toolbars. tdf#84909 (Yousuf Philips)

Before (on the top) and after (on the bottom) side-by-side of how the impress toolbars have been improved.

The View menu was reorganized to better unify its items similar to Writer and Calc. tdf#86209 (Yousuf Philips) 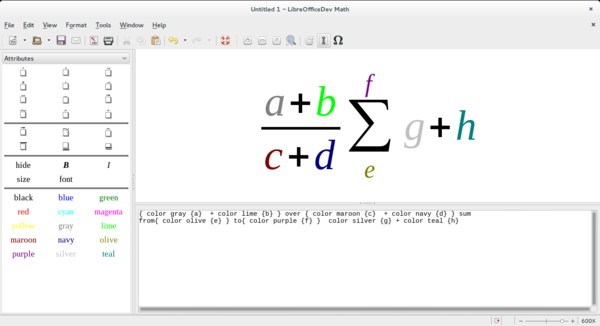 LibreOffice 4.4 adds the libre-licensed Caladea and Carlito fonts (Huerta Tipográfica). Caladea and Carlito have the same metrics and proportions as Microsoft’s Cambria and Calibri, respectively, so they can be used as drop-in replacements. (András Tímár, Collabora)

PDF's generated by LibreOffice can now be digital signed directly from LibreOffice during the export. It works on Windows, macOS, and Linux, and on Windows, the built-in certificate functionality is used to store your certificates for signing. (Gökçen Eraslan - GSoC 2012, Markus Wernig - Wilhelm Tux, fund raising, Tor Lillqvist - Collabora) 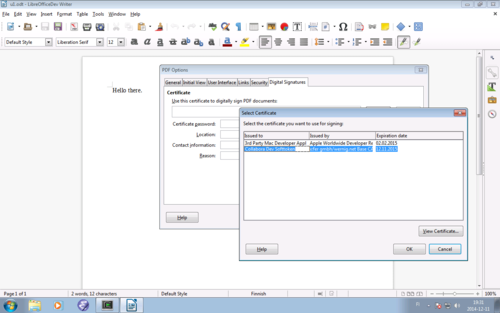 Selecting a certificate for signing on Windows. 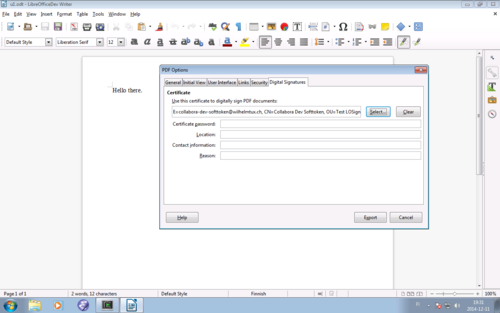 The Digital Signatures tab of the PDF export dialog.

You can move only the point next to the rectangle in "line callout" drawings, with ⇧ Shift key pressed. (Matúš Kukan, Collabora)

Improved code quality based on the Coverity scan analysis.

Results based on the Coverity scan analysis results. (Data available after registration) 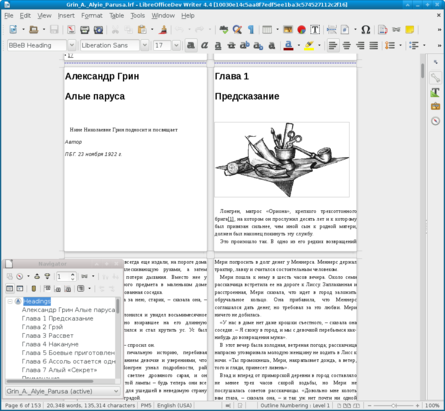 Connection to SharePoint and OneDrive

It is possible to export CSS2 dot leaders by enabling Print layout in Options ▸ Load/Save ▸ HTML Compatibility, and selecting the HTML Document file type in the Save As dialog of Writer. (László Németh)
Tested in Firefox 32, Google Chrome 39, Internet Explorer 11.

Thumbnails are now compressed to PNG-8 which takes much less space than PNG-24 without much quality degradation. Typically the thumbnails compress to about 35% of the size of thumbnail from a document saved with LibreOffice 4.3. tdf#62104 (Tomaž Vajngerl, Collabora)

Sifr as the default icon theme on macOS

LibreOffice 4.4 now defaults to the Sifr icon theme on macOS. 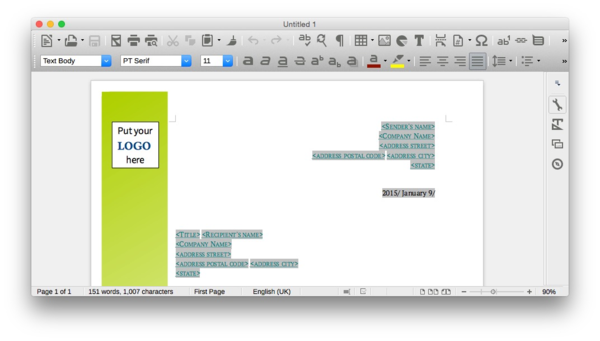 LO 4.4 rulers (on the right) have a more discrete, less distracting appearance.

Templates now appear directly in the Start Center and can be picked from there. (Efe Gürkan Yalaman, GSoC 2014; and Jan Holešovský, Collabora) 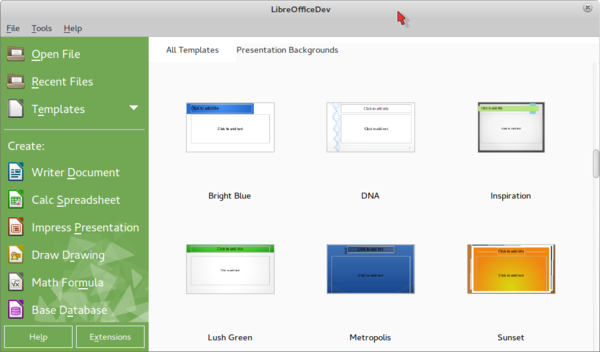 Templates in the Start Center. 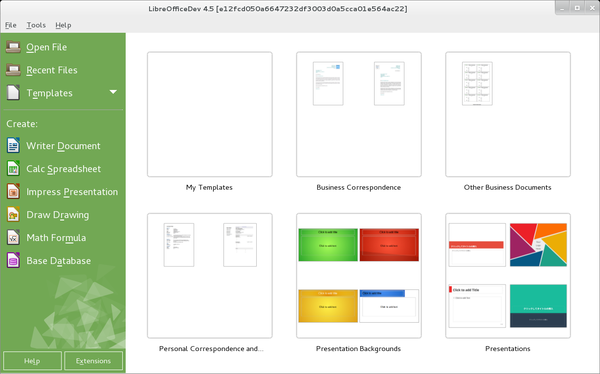 The new templates in the Start Center. 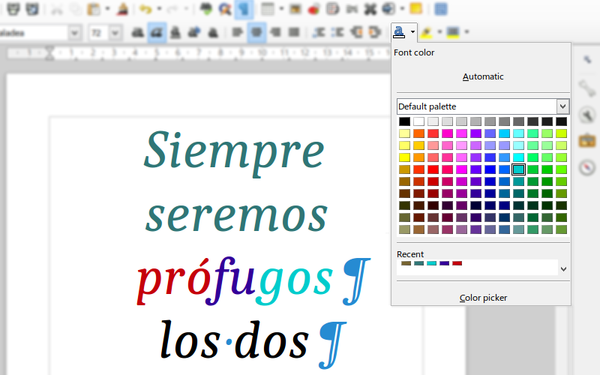 The new color selector facilitates access to custom colors and avoids the need for hunting in the menus.

The paragraph line spacing dropdown that was present only in the sidebar has been reworked so that it can be used in the main toolbar too, and was added there. tdf#83076 (Jan Holešovský, Collabora; Yousuf Philips) 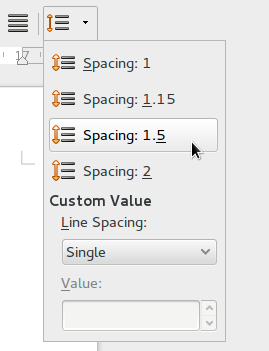 The “Bullets” and “Numbering” toolbar buttons now have drop-down menus so it easier to change the list style without opening the lists dialog. tdf#85804 (Maxim Monastirsky; Yousuf Philips) 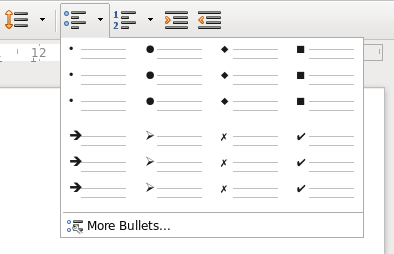 The Sidebar is still receiving progressive improvements from our community developers over the initial code import from Symphony: 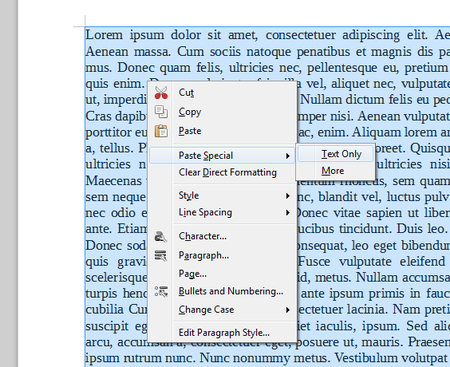 Cut, copy and paste moved at the top of contextual menu
Paste special is now available via the context menu
Removed some unused formatting options. 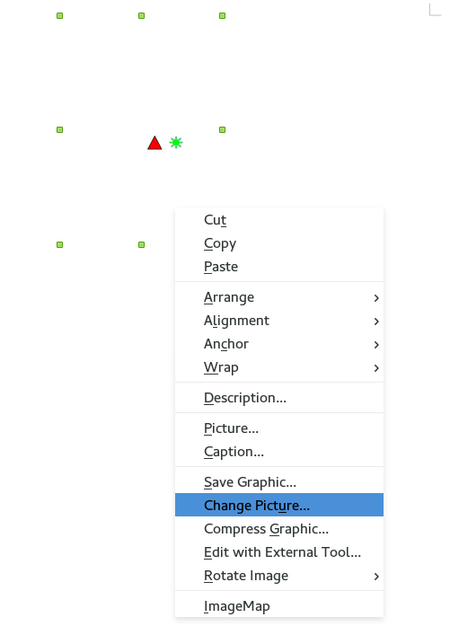 Change Picture via the context menu.

LibreOffice will now display an infobar to indicate visibly when a document is being opened in read-only mode. This infobar replaces the “Edit file” icon in the main toolbar, as its labeling and usage patterns proved confusing for users. Activation and deactivation of read-only mode is also available from within the menu Edit ▸ Edit Mode or through the keyboard shortcut Ctrl + ⇧ Shift + M. tdf#80538 tdf#80536 (Yousuf Philips, Samuel Mehrbrodt and Joren De Cuyper)

The infobar provides clearer guidance to users in this use case. 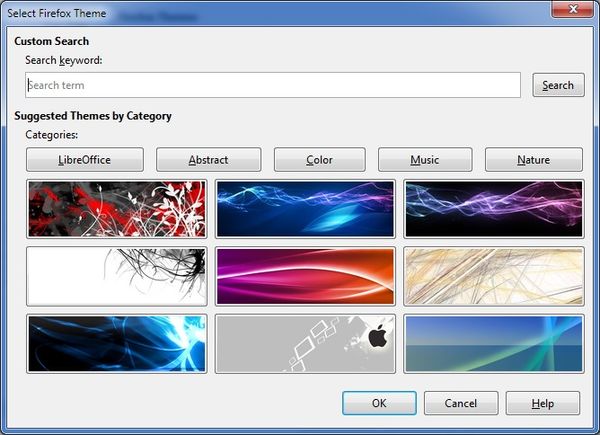 The new dialog to search and apply Firefox themes. 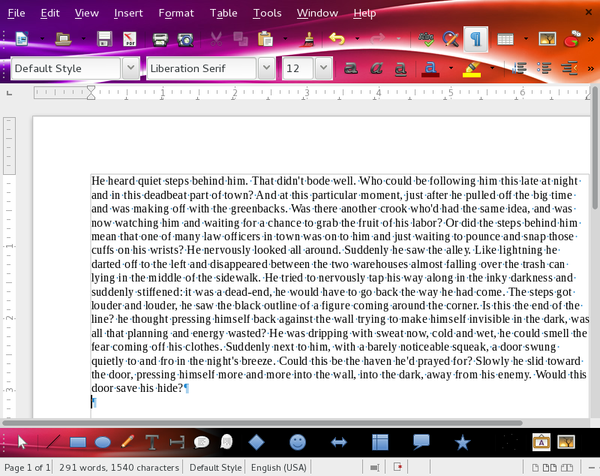 Firefox themes now apply both to top and bottom toolbars.

Images are now scaled proportionally by default in Calc and Impress/Draw as they were already in Writer. tdf#83808 (Samuel Mehrbrodt)

Special characters are now added to an editable field so special characters can be inserted/removed at the location of the cursor in the field. tdf#64302 tdf#85907 (Szymon Kłos; Adolfo Jayme Barrientos) 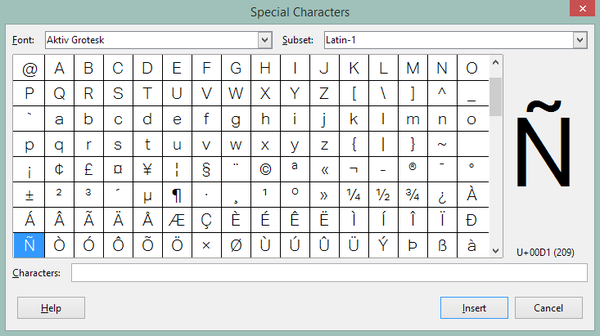 Locale in About dialog

The About dialog now informs the user about the locale⁠ 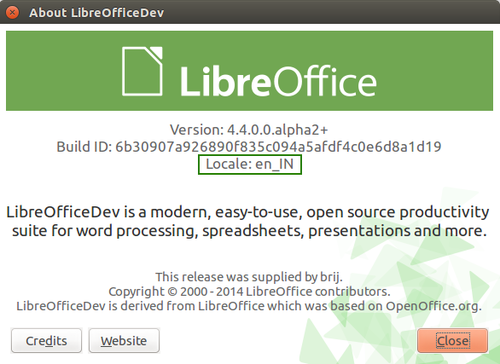 The locale information, provided below the build ID, can be useful to debug some language-related issues.