From The Document Foundation Wiki
Jump to: navigation, search
This page is a translated version of the page ReleasePlan and the translation is 18% complete.

Note that the dates mentioned in the schedule might get shifted if there are serious technical or other problems with the release. An extra RC might be needed if the final release candidate does not fit the Release Criteria. Such problem would shift the final release by one week or even more. 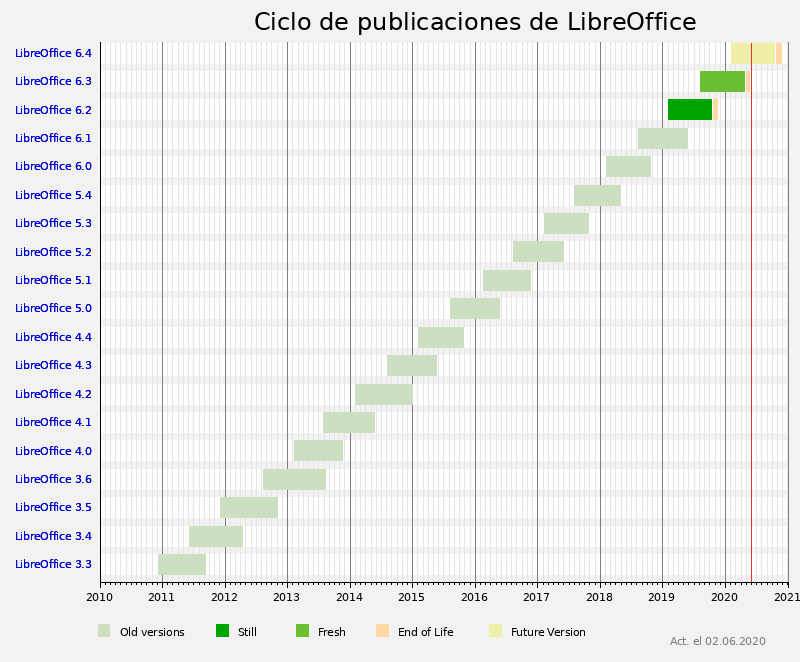 The release is time-based but the schedule defines calendar weeks instead of exact dates. It is because we are always a bit flexible. The release can be delayed by few days because of blocker bugs, build problems, and other technical issues.

The release consists of several beta and release candidate builds. There are needed several actions for each build. The ideal workflow looks like:

Note that we are very strict about commits to the final release candidate, so full regression test is not needed. It is used as the final build when it passes the needed tests. It is just renamed on mirrors.

The schedule is based on the following rules:

The result is the following template:

The release plans for the first version of each major release indicate a "hard English string & UI freeze". The idea is to make the lives of translators easier. The translators should be able to trust that no new translatable strings are added into the UI or Help files between the period of the string freeze and release.

After the first version of a major release is out, correcting mistakes in the UI and Help strings is fine. Any completely new content should target the next major release.

We do several builds around each release. The following versioning scheme is used:

It seems to be the best compromise with the following advantages:

This acceleration of the release cycle involves some considerable release engineering and QA effort. To reduce the cost of these, we work to provide complete (ie. containing all languages) daily snapshots of the master branch to allow continual testing of code improvements. This works partially already, as can be seen/downloaded from here.

Similarly, we plan to increasingly automate the build process to allow a much lower-touch release flow, and to continue to shrink the footprint of our binaries to allow far more rapid transfer of product-equivalent builds.

A release normally has a lifetime of around nine months. We consider a release to have reached its End of Life (EOL) one month after the last planned release.

If you want longer term support for a release, you’re encouraged to engage any certified L3 provider who could provide you with the service.

Because of the amount of data, the releases were split out to ReleasePlan/Archive.