Returns the value, that the sample calculation would return, if performed with the current values.

The naming “Row” and “Column” in the arguments reflects, that the function can be used to generate a two-dimensional table as it is done by the wizard in menu Data > Multiple.Operations… But in fact the current values can be located at arbitrary places.

The formula in the result cell of the sample calculation need not contain a direct cell reference for what it intended to be a “variable”. It is sufficient if the result depends indirectly on the cell of the “variable”.

A cell, which contains the current value must not depend on cells which are used in the sample calculation, neither directly nor indirectly.

The function MULTIPLE.OPERATIONS cannot take literal values as arguments, e.g. a constant number. The arguments must be references, e.g. E2 or $Sheet2.A1

It is allowed, that the mentioned references are calculated. But they must be references. Caution, the function ADDRESS returns a text, not a cell reference.

The MULTIPLE.OPERATIONS function cannot use cell ranges as arguments, even not if the function is entered as array formula.

Example A: Using the wizard

The screenshot shows the use of the wizard from Data > MultipleOperations… 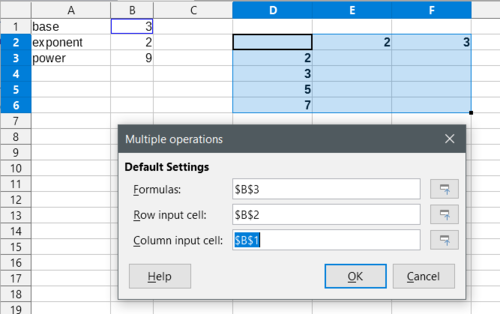 The target range has the exponent in the row range E2:F2 and the base in the column range D3:D6.

Notice how the wizard has set the $ signs for absolute addressing.

Example B: Enter the formula manually

We use the same data as in Example A. Instead of using the wizard, you can enter a suitable formula into cell E3 and then drag the formula to the right and down so that it covers the entire range E3:F6.

Despite the naming in the syntax, it does not matter in which order you use 'row' or 'column'. But you only need to make sure, that the row or column reference is paired with that cell from the sample calculation, which fits in content. There are blanks added in the formula above to indicate the pairs.

Example C: Using a “variable” not in the result cell

You can use a cell of the sample calculation, which is not directly used in the formula of the result cell. In the following example the formula =B7-B10 in the result cell B11 has no direct reference to cell B5, its value depends only indirectly on cell B5. The function MULTIPLE.OPERATIONS uses the entire tree of cells, which are used to calculate the value of the result cell.

The screenshot shows the used formulas in blue. The screenshot was generated from file Media:MultipleOperationExampleWithVariableNotInResult.ods. (The topic is a typical exercise from a math schoolbook.) 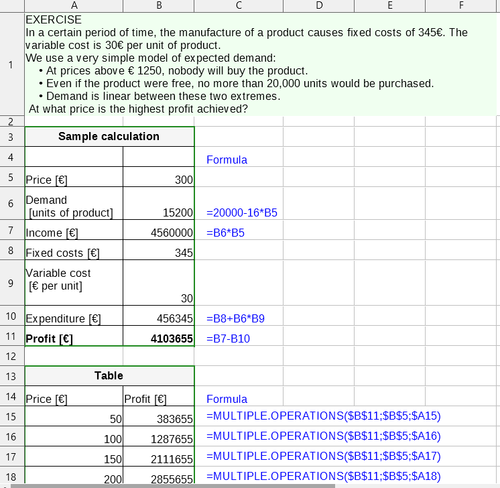 There exists no directly equivalent function in Excel.

ToDo: How needs the sheet to be structured, that an export to “data table” is possible? The help has some remarks about the topic, but is not clear.