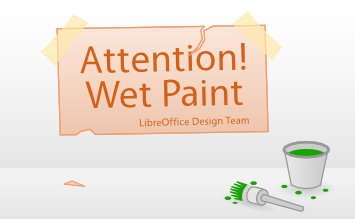 As this page doesn't only show the basic information about the design but contains links to the present state of our work, everybody is invited to join our effort:

The goal is to create an initial icon set for the LibreOffice 3.3 release. Rationale:

A release of LibreOffice 3.3 is expected from mid December to mid January ... the icons have to be provided at least approx. 5 days in advance.

Note: Due to the time constraints, the requirements do only cover the most important points.

The discussion concerning the icons takes place on the Design Team mailing list. The following table is an extract of some of the discussed issues.

Note: Basic symbolism will be used for 16px and (partly) 32 px icons. If the icons are larger, then decoration elements can be added to make them more pleasing.

Present State of the Icon Design

The present version of the icons has been released with LibreOffice 3.3.1.

Thanks to everybody having helped to make this happen!

Please update the table if you uploaded the icons. Thanks!

The source file contains the present version of all the icons - alternative proposals as different layers. (If the combined file can't be merged, when several people worked on different icons, we'll go back to individual files)