Due to recent events and some feedback from multiple people throughout the project, we held an initial discussion about how we hold meetings and operate as a team. The discussion focused on how to encourage participation and minimize fraction while ensuring that projects still move forward in a timely manner.

PENDING ITEM: What to do with FDO bugs filed against Extensions, Templates

PENDING ITEM: Should we activate voting on FDO?

PENDING ITEM: Add BOLD statement to each FDO mail sent out to not reply via mail

PENDING ITEM: How should the BugReport and Bug Documentation wiki pages be organized?

PENDING ITEM: Use an online collaborative editor for minutes so that they can be viewed as the call progresses

PENDING ITEM: What to do with releases after EOL

PENDING ITEM: How to deal with Unconfirmed bugs that QA team cannot triage

PENDING ITEM: Locally-hosted Bugzilla [was How to deal with Unconfirmed bugs...]

PENDING ITEM: Regressions within a release

We use the 'Version' field in Bugzilla to indicate the earliest build in which we can reproduce a given bug. The field is currently labeled 'Version,' causing confusion to some of our users -- e.g. some users will update the version if they can reproduce the bug in the latest build.

I suggest that we change the label on this field to "Earliest version..." (with the ellipsis), and add a tooltip "Earliest version in which this bug appears." We might want to make a change in the BSA as well?

Currently there are different ways in which we are using bibisct - some are using it and changing version # if the bug exists in 3.6alpha (earliest bibisect), others are using it only sporadically when a bug says regression but not updating version.

On a related note to Joel's Item above regarding Bibisect and version #, I propose that we consider the creation of a table of repro results for testing the bug on different versions of LO on different OSes.

Here's a quick mock-up of how the "Repro Table" could look:

Here's a mockup of the table in Bugzilla: 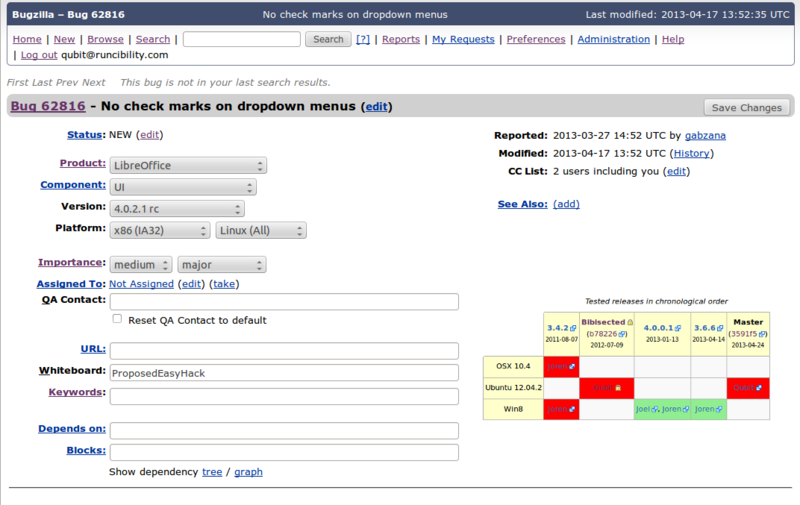 One way of implementing such a table would be to parse specially-formatted comments on bug reports. For instance, a user leaves a comment on a bug like this:

We'd take that information, add it to the existing data about previous REPRO/NOREPRO instances, and re-generate the table for the bug report.

The syntax would be pretty flexible, so that all of these would be parsed to the same values: